That was reeeeeeally really crazy. Escpecially that I didnt have any bigger plans for that day, the only thing I knew was that I would go to the Mayan Ruins of Tulum. So my adventures began when I went out from my home telling Hector that I just go for a short walk. I just went to Tulum, thinking i would stay here just for one night, I knew that Tulum is a touristic place so I just wanted to see the Ruins thats all. I ended living 5 days in Hectors house because tulum with its artistic and hippie vibe just pulled me deeper and deeper here. That happened to many people who now live in Tulum. They just come to visit and they stay here for a lifetime.

I needed to buy an converter from the european to mexican plug. As I mentioned in previous posts, when you walk in the Mexican streets, many people smiles to you and some talk to you. I wasnt surprised when I was asked que tal (whats up) by a young guy in a bike. I told him i was looking for an enchufe (plug) and he showed me where. He went with me and then proposed me to go for a beer with his friends. I wasnt really into the beer for the morning, but I said yes, let it just happen. So we went to his friends hostel together and there our adventured began!
He asked me if I had a driving licence. I didnt, but when he told me that he had a Van (!) Like a real hippie travelers van where you can live, you can sleep, cook, whatever, and Javier lived there for 3 months. But he doesnt have a driving licence. How was it possible? It was his friends car who went out of the town. He left the keys for Javier in case if he would liek to use it (even if he didnt have a driving licence – in mexico everything is possible). Why should he take the keys with him, if someone else could use it? This is the Mexican mentality. Sharing whatever ones have.
Having a perspective of going to the Mayan Ruins in a really cool hippie van, I started to look for a driver. The hostel where we were was fantastic, very Carribean style, hummocks, murals, a lot of art, so I had no doubts that in the lace like this I would find someone ready for adventure 😀 And I did! In some minutes I found the guy who was the best crazy American madafaka driver in the world! His name was Jonathan he was from Texas. He visited Mexico 14 times and it was his first time to drive a car in here! He was really excited and enjoyed a lot. We sat with had a beer, smoked a bit and when we started to talk about Janis Joplin, Beatles and Queen I knew we gonna have good wibes together 🙂 This guy, he proved to be super crazy, we were joking a lot.
We took one German and one Mexican guy with us and we went to the Mayan Ruins of Tulum. So we were going down the streets surrounded by the tropical plants in the international company, in a hippie van listening to the latin reggae in spanish xd. We were incredibly surprised about the situation, we appreciate these moments a lot. It was my 5th day in the continent of America and the incredible stuff already started to happen.

I was amazed by the Tulum ruins especially that they were my first Mayan ruins that I saw in my life. We enjoyed having the opportunity to see these wonders, walking in the place where the people many years ago had different culture and completely different civilization.

The mayan civilization. It falled naturally not because the Spanish expansion. (The probably reason why they fell I described here https://architrotamundos.wordpress.com/2018/07/09/125/)
They grew from the selva and they build big… very big piramides. In the place where always was only the forest they created
How many years they had to grow to reach this point? How much time did they build the small houses by the stone, before they started to build piramides? How strong was their faith that they were able to cut down the forests, organize themselves and build day by day, year by year such a big and beautiful thing? To make their celebrations there.
There were hundrets of hundrets of cities and pueblos like this.
The cities communicated between each other trading their goods, and familiarize with each others culture, that they became so simlar, that today we can call them all Mayas. They were HERE. And nothing but jungle around. 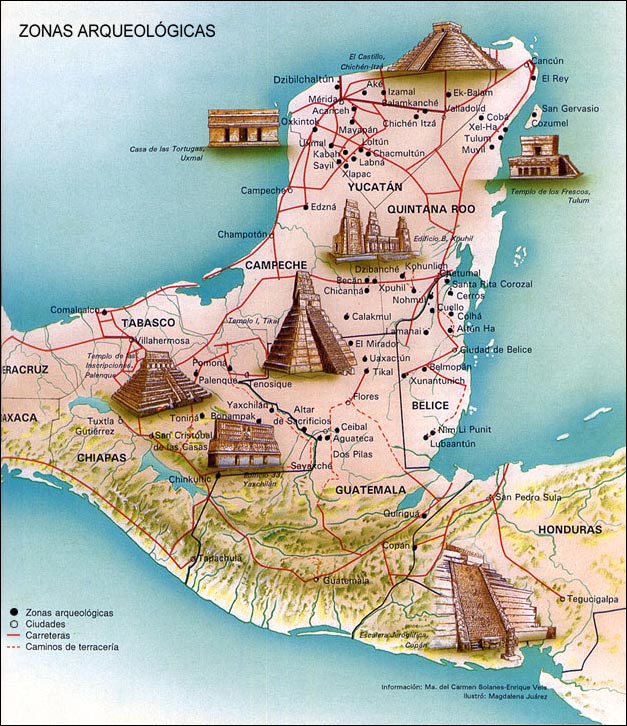 Then Javier took us to the cenote, a natural underground lake, when he goes every day, because works nearby in the restaurant in the touristic zone (he told me his salary, and its better than in Poland xd). There was also a bar and a lot of people. Nice atmosphere. As I wondered before, its super easy to get known the people here. So we started to talk & play in the water with some senoras. They said that in a month in Mexico i will just become mexican and to proove their words, one of them bautized me xd I got baptism here, in a Yucatan’s cenote and from no i am a mexican. She said she has a big hostel next to the ruinas and when I told her my working plans, she can offer me a job! Her name is Rosario and she is my gotmother now
I got my Mexican Mother. I got bautized becoming a Mexican, and I got a job!
I have never met my godfather so again I feel this fullfilled emotion when I think of having 2 godmothers ❤ (the Polish one and now the Mexican one)

Then we went to a beautiful beach. Just like from the postcards it was a beach and the palm forest behind it… I just cant believe in this day, I cant believe that it really happens. By such casuality like buying the plug it grew to become one of the best days in my life 😀
Viva Mexico! I love you… ❤ 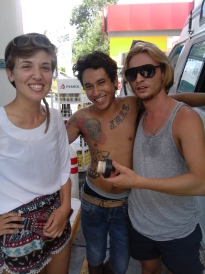